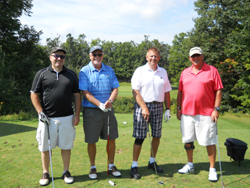 Raised in Streetsville, ON.  Being 61 years young and married with 2 kids - living in Mississauga, I started out trying to convert our own movies and videos and I still haven't completed that job!  I retired from policing after 32 years and started this business to keep myself occupied and I'm now busier than I was while working full time.  I took up golf since retiring, and being a 'lefty', I've since discovered that if the ball goes to the right, it's a hook. If it goes to the left, it's a slice. If it goes straight, it's a friggin' miracle!

Growing up in the small town of Streetsville, Ontario, I was always fascinated by my dad's collection of old black & white photographs that he kept in a box in the basement crawl space.  If I wasn't outside playing with the other kids on the street, I was likely downstairs sifting through all the pictures.  Sadly, when my parents finally sold the homestead, that box of photos disappeared... forever.  Ever since then I've been hoarding all the family photos I could find but a lot of those pictures will never be replaced.  Then my dad bought a Super 8 movie camera which resulted in a lot of film shot in the 70's - mostly during Christmas, weddings and birthdays but in order to watch movies, it was quite a production to haul out the screen and projector - only to find that the bulb was pooched in the projector.  That being said, there was no sweeter sound than the clicking of the metal sprockets as the film was fed through the machine and the sound of popcorn being munched by the handful.

Soft Touch Video began in early 2003 when I decided it was time to put the family videos and photo albums in order.  I also found a box of 16 mm film from my grandfather as well as the numerous reels of Super 8 film buried away in the basement.  The photo albums had pages falling out and the video tapes were in rough condition with labels either missing or incorrect.  And the reels of film.... well, I had NO idea what to do with them or even what was on them.  After being designated as the official "Family Historian" I took it upon myself to look into alternative methods of storing and displaying all this material on DVD's that could be played in our desktop player.  Needless to say - the learning curve was fairly steep. 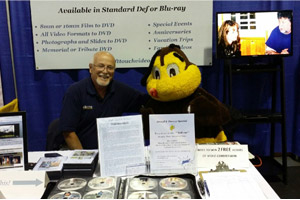 Every now and then my wife and I have a booth in the Consumer's Market at the Streetsville Bread & Honey Festival.  The last year we had a booth we offered anyone two free hours of video conversion - all they had to do was sign up for our newsletter and we drew the winner at the end of August.  Here I am with the mascot of the 2014 Bread & Honey Festival.  With the success we've had in our last two appearances, we'll likely set ourselves up in another booth again in the next year or so!  See y'all then!

Remember, every picture tells a story and it's important to know that our film, videos and pictures are able to tell their stories... again & again without us worrying about quality loss over the years.  And that's where I come in. You can relive those memories, see faces and places you had forgotten about, relive experiences that have faded into the past and do this all on a big screen Home Theatre TV from the comfort of your living room.